BMW ISN Editor Software in Autohex II lets you read ISN from DME, match it with CAS. This is essential for DME or CAS replacement, Autohex reads ISN from wide range of DME/DDE
Autohex II BMW Software is considered as one of the best BMW ISN Editors tool due to the user friendly software as well as the coverage of the DMEs and DDEs in BMW, Mini and Rolls Royce cars from 2003 up to date.

BMW ISN Reading and writing can be used from Autohex II software: CAS DME ISN Manager, This advanced function can do the following:

Read and Write ISN in CAS:

Some CAS3+ part numbers require CAS Firmware before you can read/write BMW ISN. You will get a message from Autohex Software to notify you about using this function before you do any operation in CAS ISN.

To do BMW ISN Editing for CAS: from CAS DME ISN Manager, select option 1, you will get a window like below:

From this window you can save this info into file, as well as load saved ISN from a DME or CAS and write it into the current CAS.

Read and Write BMW ISN in DME and DDE:

As described before, there are two types of BMW DME/DDE ISN, short and long.

The 4 digits DME ISN is read only, while the 32 digits ISN (SK) is mostly read/write in E series.

And DME ISN (SK) is read/write in all supported DMEs in F series. 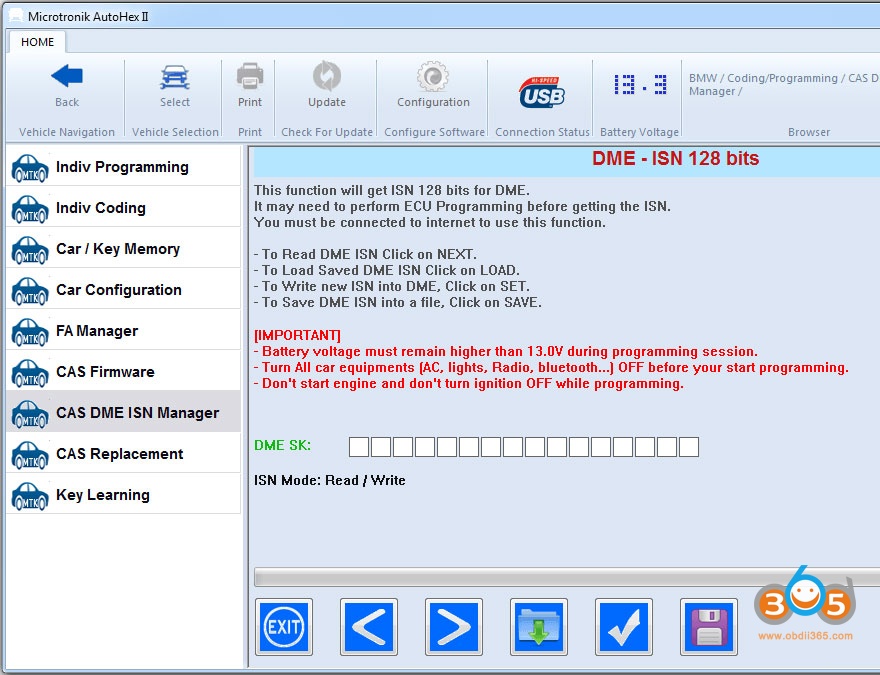 In BMW E series and Mini cooper you will see a window looks like above, A notable ISN Mode can be seen (ISN Mode: Read / Write), while the read/write ISN is supported in all DMEs in F series.

This means that Autohex II is almost able to change the DME ISN, this is a very important feature because we will not need to touch the CAS ISN.

The best practice when working on DME/DDE ISN is to avoid (if applicable) changing BMW ISN in CAS because:

If you see the status of ISN Mode is Read/Write you can match ISN as follow:

In the case of DME is read only (MSD81, MSD85,…), there is a solution to modify BMW ISN in these modules via ISN Tricore boot mode using Autohex II BMW tool.