Questions before entering:
The web says YS-01 chip just for copy 4C chips,but did not mention what key programmer will it works with，CN900，Zedbull or TMPro? 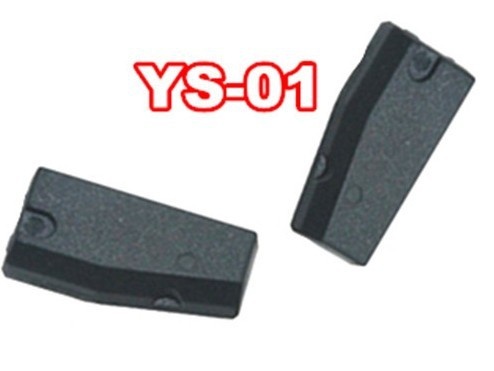 CN1, CN2 and YS01 are all the same transponder, currently. They are
manufactured from the same manufacturer. They might have been different in the past but now they are the same transponder on the inside. Also a while ago there were some YS01 which were described like a bad batch. Those had many problems like deteriorating signal over time and problems when writing 4D on them(especially on Ford and Toyota) – if you find any of them I recommend using only for 4C(less problems). So if you buying YS 01 chip clone, do not use it to copy 4D.

CN1 or YS01 can be written by most tools, but need to unlock first.

1) works well with Tmpro2 as TPX1 or TPX2 In fact for all TMpro2 Module software using the usual glass TPX2 transponder, you can use the YS-01 and even when locked you can still configure back this transponder as TPX1.It meant for all TMpro2 module software using the TPX1.
2) works well with the Clone Zed bull + EFfi software only as TPX2. for all EFfi Module using as transponder tobe used the TPX2.But as compared with TMpro, once this transponder has been programmed via the EFfi software and locked,it can not be unlocked for further use.Works also for TOYOTA ID 67; 68, 69, 70 Key cloning.

3) I also have confirmation from the Chinese that CN2 and YS 01 don’t support ID64. ID64 need bigger memory and CN2/YS01 don’t have enough.
You can’t exactly unlock it – there’s no special function for this. But
you can copy an empty transponder over it. Can unlock using TM100, TS888 or CN900/China version ND900. Just overwrite the locked transponder with blank YS01(copy a blank YS-01 over the locked YS-01) and it will be as good as new. CN2 can be unlocked with CN900/ND900 and sometimes with China ZedBull – you need to clear the ticks and write 00 in all pages. Then you can write again.

TMPRO2 can unlock YS-01 or CN2 even if locked by EFfi and program any of these back as ID4C (TPX1) or ID60,61………70 ( TPX2) except the ID64. In fact i have especially tried YS-01 with Jeep Cherokee(ID64) dump and Tmpro2 without success and got confirmation that is does not work.

Some information in this post are provided by DK locksmith.